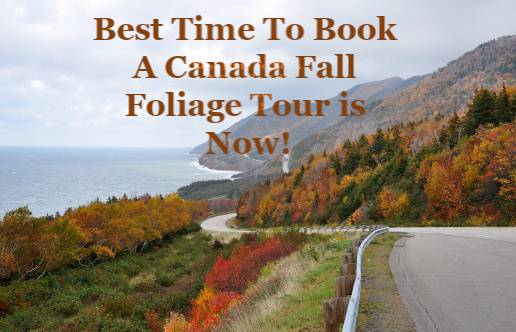 I've had several clients ask me about when the best time to book Canada fall foliage tour and my answer is always the same, and it's now! Let's get the obvious out of the way first... Canada is by far the second largest country in the world and many would say that to try and pin point the best time to see any fall foliage there is almost impossible. I would agree if what they were talking about were the weird weather patterns we've been having. I mean the South Pacific for instance has been going like night and day there! In the southeast part of Australia Australia and Kangaroo Island we've been seeing nothing but fires, and those poor animals, my God!! Then in New Zealand is nothing but rain, I'm telling you... Night & Day!!

However, like numbers, seasons don't change; is that a fair statement? I mean, Spring, Summer, Fall and Winter begin & end on the same day, and that being said, we know when leaves begin to change, and YES this can vary by a few days. However, what's important is knowing where the best places to see fall colors in Canada are, and you've come to the right place!

On our list of best places to see fall colors in Canada, we will be adding them alphabetically, so here goes...

If you're looking to start researching Canada Fall Foliage tours, there are a few we could recommend for you at the best price possible! Keep in mind that airfare is always changing in price, and rarely does it reduce in price, so the faster you book your flights, the faster you'll be able secure the best possible price.