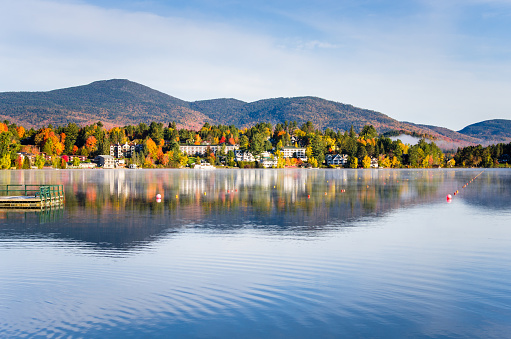 Lake Placid began developing as a major tourist location in the latter part of the 19th century. The town itself is set on two lakes, Mirror Lake and the larger Lake Placid. It has been the proud host of two Winter Olympics, in 1932 and 1980. As well as being home to the Olympic Center which houses four ice rinks, it has the informative 1932 and 1980 Lake Placid Winter Olympic Museum. In addition, Lake Placid has several large sports training facilities, especially for winter events, such as the Olympic Ski Jump Complex, a year-round training and competition site. Another famous attraction is John BrownÃ¢??s Farm and Grave just outside the village, where the famous abolitionist brought his family in 1849 and where he conceived his ill-fated raid on HarperÃ¢??s Ferry in an attempt to end slavery.