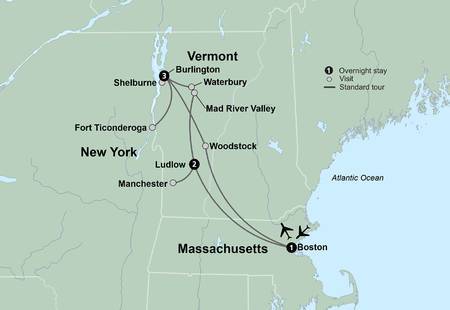 Woodstock
This quintessential Vermont village is characterized by its Village Green, general store, farmers market and covered bridge. Framed by fire colored leaves in the fall, Woodstock is a perfect place to stroll, shop or dine.

Quechee Gorge
Vermont's "Little Grand Canyon" and deepest gorge was formed from glacial activity approx. 13,000 years ago. During the 19th century the park land was part of a woolen mill which employed much of the town. Wool from the mill was made to make Major League Baseball uniforms and blankets for the U.S. Armed Forces. Today the gorge is a beautiful natural area from where visitors can camp, hike or see breathtaking fall foliage.

Burlington
Visit the quaint Vermont village on Lake Champlain. Its picturesque fall foliage, Green Mountain backdrop, and winding rural roads make it an iconic autumn adventure. Known for its eclectic and artistic residents, Burlington is the perfect mix of rural and lively.

Shelburne Museum
Discover exhibits of art, design, and Americana housed in Shelburne Museum. It displays paintings, folk art, textiles, and New England history and architecture in 39 unique structures across 45 acres. The museum is an exhibit in and of itself, with a number of historic buildings moved to its grounds.

Choice on Tour
At the museum of Fort Ticonderoga, choose to examine the world-renowned 18th-century military collections and interact with British soldiers that participate in shoemaking, tailoring, and carpentry -OR- choose to take a leisurely walk along the Carillon Battlefield Trail, a scenic and historic 1.7-mile trail around the 1758 battlefield home to artfully preserved Revolutionary War earthworks.

Lake Champlain Ferry
Cross from New York to Vermont on a relaxing Lake Champlain ferry ride. Take in the scenic autumnal views of vibrant foliage and rolling hills and mountains. The lake spans 12 miles at its widest point and touches Vermont, New York, and Canada.

Adirondacks Farm & Apple Orchard
Stop at a local farm to taste some local delights. The region is known for its sprawling and delicious apple orchards. Taste some typical treats, including apple cider and cider donuts. The fall is special in New England because it 's when apples and apple-containing treats are in season!

Ben & Jerry 's Ice Cream Factory
An entrepreneurial success story which began in 1978, Ben and Jerry's ice cream has become part of Americana. Started after following a $5 correspondence course in ice cream making and with a $12,000 investment, this corporation first opened in a renovated gas station in Burlington, Vermont. With a commitment to natural ingredients, famous favors included the creatively named "Jerry Garcia" and "Chocolate Chip Cookie Dough."

Vermont's Scenic Route 100
Venture through Vermont 's Scenic Route 100. Located in southern Vermont, the drive stretches nearly 200 miles and was recognized by Yankee Magazine as one of “the most scenic drives in New England.” Take in its sprawling farms, fall foliage, and mountainous backdrops.

Mad River Valley
Visit Mad River Valley, a popular tourist destination due to its picturesque New England feel and skiing. Take in its iconic covered bridges and mills. Meet the Vermonters who call the Valley home, and find out what is so special about the community isolated by the river.

Hildene - The Lincoln Family Home
Take a tour of the Lincoln residence, built by Robert Todd Lincoln who was the only surviving child of Abraham and Mary Todd Lincoln. This Georgian revival mansion was built at the turn of the 20th century and is located in the scenic village of Manchester, Vermont.

Discover Vermont 's winding roads lined with autumn foliage and cozy towns with an eclectic spirit. Experience the quintessential New England town of Woodstock. Enjoy a 3-night stay in the youthful, artsy hub of Burlington. Step into the past at the Shelburne Museum, a sprawling campus of nearly 40 buildings dedicated to art and Americana. Feel the past come alive at Fort Ticonderoga, where 18th-century artillery line the outer walls and actors go through a soldier 's daily tasks. Connect with the local community in the Mad River Valley. Stop at Hildene, the former home of Robert Todd Lincoln, past Chairman of the Pullman Company and son of Abraham and Mary Todd Lincoln. On a colorful journey through the “Green Mountain State,” find local artisans, tasty treats, and an age-old history in New England.

Day 1: Boston, Massachusetts - Tour Begins
From winding roads in deep valleys and idyllic country homesteads, to a visual symphony of vibrant autumn leaves, there 's no better place to experience a slice of classic New England life than in Vermont. Overnight in Boston, one of America 's oldest cities, before heading north to Vermont - a microcosm of New England at its finest, without the long bus rides.
(Meals: None)

Day 2: Boston - Woodstock, Vermont - Burlington
Start your morning with a colorful drive to Vermont, making your way past rolling hills, climbing mountains, and flowing waterways. Quaint villages, old fashioned steeples, local boutiques and country farms adorned with historic barns are the quintessential staples of the “Green Mountain State,” providing a nostalgic yet welcoming environment. In Woodstock, admire the town 's iconic covered bridge, a perfect pairing to the restored Georgian houses lining the central square. Stand in awe before the mile-long Quechee Gorge, created by the water 's slow and constant carving during the Ice Age era. Continue on to Burlington, your home for the next three nights. Located on the shores of Lake Champlain, Burlington is an eclectic college town that maintains a young and art-friendly vibe. Enjoy a welcome dinner with your travel companions as you settle in.
(Meals: Breakfast, Dinner)

Day 3: Burlington - Shelburne - Burlington
Step into history at the Shelburne Museum with a local guide; then discover its historic buildings, gardens and galleries on your own. Spread out over 39 buildings, the inimitable museum not only pays homage to New England architecture but also houses a world-renowned collection of art and whimsical Americana including the steamboat Ticonderoga. Enjoy time in the heart of Burlington at Church Street Marketplace, an award-winning open-air center that features street performers, local shops, and up-and-coming musicians. Tonight, get a true taste of local flavor with a unique Vermont-inspired menu where you 'll savor harvest vegetables, local cheeses and crisp cider.
(Meals: Breakfast, Dinner)

Day 4: Burlington - Fort Ticonderoga, New York - Burlington, Vermont
Venture to the western side of Lake Champlain as you head into the Adirondack region of New York. Nearly a mile high, the mountains stretch over a stunning nature preserve full of twisting ravines, rocky cliffs, and green forests. Feel history come alive at Fort Ticonderoga, a battleground from the 1700s. Decide how you discover the site because it 's your choice! See the 18th-century artillery collection lining the outer walls and visit the costumed British soldiers that participate in musket maintenance, carpentry, tailoring, and other daily routine tasks -OR- take a leisurely hike on the Carillon Battlefield Trail, a loop that offers stunning views of Lake Champlain, Vermont 's Green Mountains and Mount Defiance. Continue through a series of autumn colors as you depart Ticonderoga and pass through cozy towns on your way to Rulfs Orchard, a family-owned farm. Opened in 1952, the farm provides tasty treats to satisfy your sweet tooth, including freshly baked cider donuts. Cross back into Vermont by means of a Lake Champlain ferry, giving you a different view of the mountains surrounding the freshwater lake.
(Meals: Breakfast)

Day 5: Burlington - Waterbury - Mad River Valley - Ludlow
Get a taste of a national favorite at Ben & Jerry 's Ice Cream Factory, where a guide will teach you about this dairy delight before you sample this sweet treat. Head south on Route 100, where tree-lined mountains and gently rolling hills create one of the most scenic routes in New England. Stop at the Lareau Farm Inn, home to the original American Flatbread Company; for lunch you 'll enjoy a taste of their famous pizza featuring ingredients from nearby farms and wash it down with a local Vermont brew. After your meal, meet the Vermonters who call the Mad River Valley home. From fiber mills to sculpture galleries and covered bridges, you 'll get a true slice of Vermont life. Settle in Ludlow and take in the striking landscape as you relax at the Jackson Gore Inn at Okemo Mountain, your home for the next two nights.
(Meals: Breakfast, Lunch) 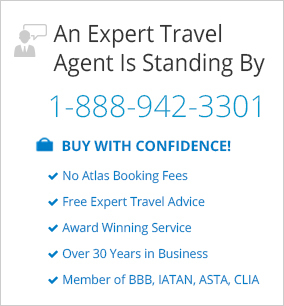